'I will create another Moov & DermiCool' 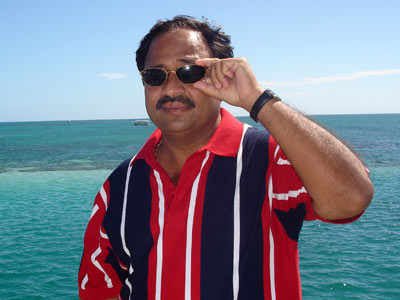 The ad world knows him as the DNA of Paras Pharmaceuticals that created brands like DermiCool, Moov, Livon, D'Cold and a host of OTC products that are household names today. Darshan Patel , the younger brother of Paras CMD Girish Patel, has always maintained a stoic silence since he left the company in 2006. He opened up before ET days after Paras promoters Actis Capital LLP and Sequoia Capital are reportedly wooing buyers to sell their controlling stake in the company. Excerpts from an interview with ET:

Your journey with Paras Pharmaceuticals?


I ideated and executed all the brands that took birth from the Paras stable. Be it Moov, Krack or Set Wet, all the brands were part of me. From 1986-2004, I gave my heart, mind and soul to Paras. Brand building for Paras was my forte and I am glad that people still recognise me as the man behind them.


What according to you was the key to the success of all the brands?


I was a science graduate and had absolutely no knowledge about brand-building. Perhaps, that helped. I could think out-of-the-box and like any other consumer. We could create D'Cold against Vicks Action 500, a DermiCool against Nycil, Krack against Vaseline and a host of products like Set Wet and Livon that were absolutely new categories. Now the brands are generic names - for instance, DermiCool was for prickly heat.


Considering you fathered the brands, why did you exit the company in 2006?


It was a very painful exit for me. But I had to do it because it was the call of the family. I kept my family over my own business interests. After my father's untimely demise in 1998, Girishbhai (eldest of three brothers) took charge of the company. In 2006, I took a call to quit. Somewhere midway, I could not get a sense of the going and one fine day, I decided to hang my boots in Paras. It took just three minutes to get out of the business.

I will invest my money in family-owned firms and turn them around
Girish Patel, the founder and chairman of Paras Pharmaceuticals Ltd, was trained by his uncle at the age of 16 and had worked as a peon in the firm run by his father and other close relatives. Early this week, the Ahmedabad based company, known for brands such as Moov, D’Cold and Krack, was sold to UK-based Reckitt Benckiser Group Plc for Rs3,260 crore.

Patel, 52, has made at least Rs900 crore by selling his 30% stake to Reckitt. He wants to invest the money in family-owned firms and turn them into professional outfits, as a private equity investor would.
In an interview, Patel, a commerce graduate, talks about his plans with the big money and explains why he chose to exit the family firm. Edited excerpts: Future plans: Paras Pharmaceuticals founder and chairman Girish Patel. Vijay Soneji/Mint
What do you plan to do with the money that you have made?
We will get roughly Rs900 crore. Paras is very close to my heart and I will not re-enter FMCG (fast-moving consumer goods) or the OTC (over the counter) segment. If Paras needs me, I will be there.
I will use the money to invest in family-owned companies and turn them around into a professionally-driven ones. I will look for a minority stake in these firms and will exit after helping them grow. This is similar to a PE (private equity) firm but I plan to do it in my individual capacity.
Also, I will be looking for a mid-sized acquisition for my son who is now 25 years old. I will look for a company with Rs50-100 crore turnover that can be converted to Rs1000 crore in a span of five years or so.
In 2006, Actis Advisors Pvt Ltd entered your company as a minority stake holder, raised its stake later and finally sold its 63% stake. You too have chosen to exit. You were planning a public float. What made you change your plans?
In 2006, we entered into the hospital business and few months later Actis picked up a minority stake in it. We were for an IPO (initial public offer) but I felt that the company was not mature enough to go public.
My youngest brother Darshan wanted to cash out and his stake went to Actis. Sequoia Capital (India Advisors Pvt Ltd) too picked up a small stake from distant cousins and other small shareholders. The plan was to allow the PE players an exit route by way of an IPO.
However, my younger brother Davendra, who had 30% stake, decided to exit in 2008. After this it became challenging to go public as our family stake came down and it was only prudent to create a value and exit.
You might be surprised that in 1987 my family had held only 25% in the company before we took it up to 48% and raised it to 90%. All these years, we brothers have invested and re-invested our income, dividends, etc. to increase our stake in the company.
How have the PE firms helped in the growth of your business?
In 1959, my father took over a small company that was into manufacturing liquids for the pharma industry for Rs7,000. I was trained under my uncle at the age of 16 and worked even as a peon in my own company, running errands like fetching a glass of water. If you remember, 1983-85 was a sellers market...
Multinational companies in India were frightened to change because of their legacy. While they required more time to adjust, we had settled in. We exploited the most with modern products, display and packaging.
The second opportunity came after 1995 when it was an era of distribution. Paras was a bit late to seize the opportunity. In 2001, we tried but failed due to family constraints. We had attained size but was not ready for a change in terms of thought process. When Actis entered, we had a turnover of less than Rs300 crore. We chalked out a blueprint and changed our distribution system, brought in technological changes, built a brand portfolio and changed the quality of manpower. We have close to 700 employees and 70% have been replaced in the last three years.
There have been rumours about me being sidelined after Actis came into picture. They are all baseless. I have been given full freedom as a chairperson in my company and my experience and insight were always sought by Actis. In fact, I was involved with Actis in the selection of the new managing director and CEO C. Raghunandan.
Your youngest brother floated an entrepreneurship firm Vinni Group soon after his exit. The products of Vinni are very similar to that of Paras. Did you face stiff competition from him?
There is a huge market where everyone has a chance. For me, it was competition like with any other company and I countered it the same way. I prefer to keep family and business separate and don’t mix them.
I have treated Paras as my son and everything has been available for it. My brain and heart will beat only for Paras. Certain section of the media played up my relationship with my siblings. Let me tell you that my brother Darshan took the entire responsibility of my son’s wedding on 9 December, the day I sealed the Paras deal with Reckitt.
What made you zero in on Reckitt? Emami had offered a better deal.
I will not comment on any specific bid. I was wearing two hats — one of the company chairman and another of a shareholder. A decision was arrived at after discussions with other shareholders and we have decided what is beneficial for the organization. I wanted somebody to take over from me who could take the brands, which are very close to my heart, at a global level and take my team members along.
Apart from the brands, does the deal also include the manufacturing facilities at Baddi and Kalol? What happens to the hospital chain Sterling Addlife, a subsidiary of Paras Pharma?
The deal includes the Baddi factory. I have fond memories of Kalol property and have bought it at a market rate ahead of the deal. I intend to keep it with me and my family. Sterling Addlife is not a part of the deal. We have demerged the hospital business from Paras. I am the chairman and hold close to 12% in this company. Actis made an entry into Paras by picking up stake in Sterling and today it holds at least 80% in it. Sterling has five operational hospitals in Ahmedabad, Vadodara, Rajkot, Mundra and Bhavnagar.
We have recently taken management contract for a hospital in Kutch. We intend to have hospitals with 1,000 beds operational by June next year.
Source : Maulik Pathak ,http://www.livemint.com