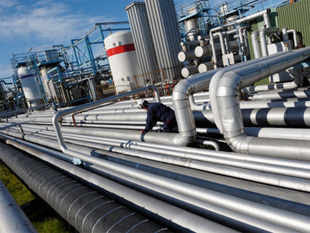 French warship maker DCNS will buy close to 15% stake in Nikhil Gandhi-promoted shipbuilder Pipavav Defence & Offshore Engineering for about Rs 1,350 crore, according to people close to the development. "DCNS will invest a little more than Rs 1,350 crore to acquire a significant minority stake in Pipavav Defence," one of the persons said. "They had earlier signed a strategic alliance with Pipavav, but have now decided to be a strategic investor. The stake sale will be completed over the next few days." A formal announcement is likely soon. DCNS, owned by the French government, specialises in building surface combatants, submarines, systems and equipment. The company reported revenues of $3.3 billion last year. "DCNS recently received in-principle nod from the French government to invest in Pipavav. The deal will be closed by next week," another person involved in the deal said. Pipavav's top executives were not available for comment. SHARES VALUED AT 30% PREMIUM The deal would value the shares of Pipavav at a premium of 30% to their Friday closing price of Rs 92.95 on the Bombay Stock Exchange, where it ended down 3.28%. The French company's interest in Pipavav is a sign of the growing interest among foreign players to invest in India's defence sector. Japanese conglomerate Mitsubishi has expressed interest in acquiring stake in LarsenBSE 0.78 % and Toubro's shipbuilding subsidiary. In May, Pipavav had sought shareholders' approval to raise up to $200 million (about Rs 1,100 crore) to finance its growth plans for the defence sector. Earlier this month, the company had formed a joint venture with Mazagon Dock, the country's biggest naval shipyard. Interestingly, Mazagon Dock had said in February that it was manufacturing six SSK Scorpene submarines (P75) under transfer of technology from DCNS. According to people in the know, DCNS plans to increase its stake in the Indian firm to 26% by next year and bring in three of its executives on the company board once necessary approvals are in place. Last month, Pipavav had announced a deal with Saab, under which the Sweden-based defence and security company would invest Rs 201 crore for a 3.5% stake. Public-private partnership in the defence sector was opened last year, and Mazagon Dock was the first off the block. Three others - Cochin Shipyard, Hindustan Shipyard and Garden Reach Shipbuilders - are expected to follow suit. Pipavav's deal with Mazagon Dock, notified by the defence ministry recently, will help Pipavav execute at least some of Mazagon's order book, which runs into at least Rs 1 lakh crore. Following the notification, insurance company LIC recently increased its stake in Pipavav to 8.74%. Indian shipyards contribute only 0.1% to the global shipbuilding industry. In contrast, shipyards in China, Japan and South Korea produce more than 75% of the vessels manufactured globally, forcing Indian shipyards to look for orders from the domestic defence sector. India has about 150 warships in service with its navy and another 75 warships in Coast Guard.