Arvind Mills: From near bankruptcy to reinvention

Arvind Mills: From near bankruptcy to reinvention 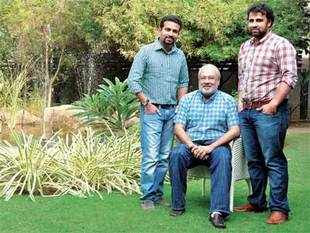 Punit and Kulin Lalbhai were schoolboys, aged 16 and 13, when Arvind Mills came close to bankruptcy in 1998. The Lalbhai group flagship had piled up huge debts to finance capacity expansion, just at a time when demand for its main product, denim, went on a decline and managing director Sanjay Lalbhai was in negotiations with 85 domestic and international lenders to restructure the debt. What was it like at home? "Dad absorbed the stress like a sponge," says Punit. "He protected us all from what was going on at Arvind. We weren't exposed to the pressure."

Now designated executive director in charge of Arvind's new advanced textile materials business, the 30 year old Punit has inherited a valuable asset from his father — a deep resonant voice, which he combines with a wry wit gained from his years as a would be activist doing environmental studies at University of CaliforniaDavis. The 27 year old Kulin, on the other hand, has inherited the Lalbhai enthusiasm for business. A graduate of Stanford, with an MBA from Harvard, the younger sibling in also an executive director on Arvind's Board, with specific charge of the new Arvind store business. He remembers very little from the tough days the group went through. "Punit and I are working with a clean slate. We have the privilege of looking to the future," he says.

Sanjay Lalbhai has made the going easier for his two sons by putting them in charge of nascent projects where they can choose their own teams, though it also means they will have no one to blame if the projects don't succeed. Succession planning has come a long way since Lalbhai's own days, when he was inducted into the family business as purchase manager, which he quite hated.

That's when he went off and started a series of business ventures of his own, like Amtrex air-conditioners and Anagram Finance. These ventures have since been sold, but valuable lessons were learnt in getting them up and running, the same lessons Punit and Kulin are now imbibing. "They are entrepreneurs with their own projects and the businesses they handle are important to our overall strategy. Now they have to create a track record and earn the respect of other senior managers," says Lalbhai.
The company that the two brothers are set to inherit will certainly be very different from what it was when they were teenagers. Arvind has always had an uncanny knack for reinventing itself, first as one of the world's biggest denim manufacturers, then as a marketing-led company with a large roster of famous apparel brands and more recently as a major player in retail.
"The company has never been resistant to change," says Lalbhai. "We are now in the whole value chain of textiles and we have a presence in real estate, telecom and engineering, which we will grow.
Eventually, we want to be a conglomerate.

In a growing economy, there are opportunities beyond core competence."

Observers say Lalbhai's plan to be a conglomerate is part of his succession strategy — he wants to create something that can be divided without being torn apart. But all that is still far away. At 58, Lalbhai is not exactly patriarch material.

He's recently lost a massive amount of weight through a crash diet and looks fighting fit and very much in control.

"After a long time I have a feeling of comfort that comes from having the right people in the right position. We had to experiment and make changes along the way, but now things have fallen into place," he says.

One of Lalbhai's 'right people in the right position' is Suresh J, managing director & CEO of Arvind's two Bangalore based subsidiaries, Arvind Lifestyle Brands and Arvind Retail. A former Hindustan UnileverBSE -0.32 % ( HULBSE -0.32 %) man, he visualises Arvind as the 'HUL of apparel', with a brand strategy for every segment. The company currently has a portfolio of 25 brands, of which 13 (such as Flying Machine, Excalibur) are homegrown and 12 (like Arrow, US Polo Assn) are lisenced.

Suresh is in conversation with a dozen more global brands that want to enter India and says, "We want to tie-up with those that operate in a growth segment that doesn't clash with our existing portfolio.

For example, we've just tied up with Nautica, so we're not looking at men's sportswear brands right no."

One of Arvind's big successes has been in transforming its Megamart 'factory outlets' into a Rs 550 crore value-store brand operating mostly in the southern states and Maharashtra. Megamart has given the company credentials in the retail brand space, recently leading to a tie-up with British department store Debenhams and Next, which has a kidswear range that Arvind is particularly keen on leveraging. In womenswear, it has tied up with Elle, of the magazine fame. "These are good times for branded apparel. People are spending more on looking good. It's a very profitable business if you get the business model right," says Suresh.

Brands and retail currently make up 27% of Arvind's Rs 5,000 crore turnover and 12% of its Rs 436 crore net profits. With new brands being acquired every year, the company has made an ambitious projection that this business alone will grow to Rs 5,000 crore in five years time. Fabrics, once the company's mainstay, are projected to play a smaller part in the company's business portfolio in the years ahead. Take denim, the fabric Arvind is famous for. Its share in total turnover has reduced from 60% five years ago to 35% currently and this is expected to reduce further to less than 20% in five years.

That's hardly good news for Aamir Akhtar, CEO, denim, but he speaks up bravely in his fabric's defense, saying, "The denim business has actually grown at an average of 10% annually, though the company's dependence on it has gone down. We have moved out of commodity denims to differentiated denims where we have developed knowledge and expertise that others can't match."

Stretch denim is already passe, and the latest products coming out of Arvind's design studio include linen denims, jacquard denims that can be worn or used in furnishings, denim coated to look like leather, denim coloured on the inside. Meanwhile, Arvind has reduced its dependence on the fickle export market which once let it down so badly.

Today, half the company's denim sales are in the domestic market and most of this goes to the unorganized sector, finding its way into the unbranded jeans sold on streets. "These guys have a low cost structure, but they don't compromise on fabric quality. The mass market is the growth market. In the developed world, each person buys six pairs of jeans a year. In India the figure is only 0.3, so we have a way to go," says Akhtar.

Arvind has always kept an eye on the mass market, its luxury brand portfolio notwithstanding.

In the mid-90s, it launched a brand called 'Ruf'n'Tuf', which consisted of a length of denim with accessories like rivets and a zip, which the aam admi could get stitched. It was a great initiative that failed, mainly because it was found that the tailor-made jeans didn't quite make the grade. The company is now making another attempt to reach out to small-town customers, this time through a chain of Arvind stores. Modelled on the Raymonds stores, these outlets will stock fabric in thaans, as well branded apparel.

"We have brought so many iconic global brands to India, while our own brand has lost mindspace," says Kulin Lalbhai, who is in charge of the project. "People in my age group haven't been exposed to the Arvind brand, though we have actually been in the retail space for 80 years. Arvind still has strong brand equity and we are capitalising on that through new format stores."

Over the past two years, Arvind has been testing the concept in Andhra Pradesh, with 30 stores in places like Attapur and Anantapur, where rural incomes are relatively high. These stores stock cotton fabrics as well an outsourced range of wool and poly-wool blended fabrics and each store has its own tailor.

The Andhra experiment has been successful and the company now plans to open stores at the rate of five a month.

"India will never give up bespoke clothing," says Kulin. "The idea is to give this segment styling services through our tailors, who will offer them the latest cuts, supplied by our design studios."

The dynamics of the global fashion industry have been changing since the economic downturn, with top brands now leaving fabric design to suppliers like Arvind. Susheel Kaul, Arvind's CEO for knits and woven fabrics, consequently has a big say in what the world wears, season after season. Knits and woven fabrics have now overtaken denim in terms of turnover and Kaul says, "More than 80% of our designs are accepted by our customers, which include brands like GAP, Zara, M&S, Marco Polo. We have developed the capability to make intricate fabrics that give us an edge. For example, we make indigo dyed fabrics that go into shirts and dresses which give us an EBITA of 25%."

While denim is made in the Arvind's old mill in Ahmedabad, non-denims are made in the new Santej textile complex (the project which nearly drove the company bankrupt).

Santej is also home to the company's new advanced textiles business, which is developing materials that go into bullet-proof jackets and fire-proof clothing. The division, headed by Punit Lalbhai, has recently signed up for a joint venture with Germany's PD Fibreglass group for making glass fabrics for the automobile, energy and aerospace industries. At his first Board meeting as an executive director, Punit's time was spent explaining what the business is all about. Though he's settled into his role in the family business and even done an MBA from INSEAD, Punit can't resist talking about his other vocation. "Our Board might benefit from having an environmentalist.

Our global customers certainly do appreciate my environmental concerns," he says.

On surplus land located near its facilities in Santej, Arvind is executing a Rs 1,400 crore low cost residential housing project in equal partnership with Tata Housing. In Ahmedabad, Arvind Realty has redeveloped what was once a mill property into a residential and commercial complex, and in Whitefield, Bangalore, the company has developed a parcel of land that was previously a garment factory into a residential complex called Arvind Expansia.

Real estate currently contributes less than Rs 100 crore to Arvind's top line, but it is set to grow. "We started with the idea of monetizing our own surplus land, but these projects have given us the confidence to become a fullfledged real estate player in Gujarat," saysKamal Singal, CEO, Arvind Infrastructure.

"We are now buying land in Ahmedabad with the idea of creating townships. Many people are also coming to us with proposals to develop their land. The internal rate of return in this business is 30%, so it is very attractive."

That would be music to the ears of long time CFO Jayesh Shah, who navigated Arvind through the stormy waters of 1998.

The company is in the pink of financial health now, having reduced its debt-equity ratio 0.9 (from 1.8 three years ago) on the back of increased net worth. It finally rejoined the dividend club this year and Shah says, "More than 27% of our shares are held by retail investors, who value dividend pay outs. But more importantly, it makes a statement that we can maintain this level of performance in the future."