Source : Press Trust of India; http://www.business-standard.com
Posted by NSE2ZOOM at 10:55 AM 1 comment:

Heard of Nandan Denim? Here’s why you should

Heard of Nandan Denim? Here’s why you should 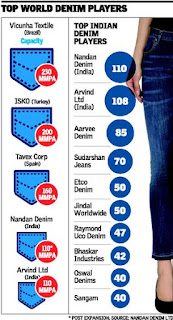 With a planned expansion to 110 million metres a year by June, the Gujarat-based firm is set to become Asia’s largest denim manufacturer

At present, Nandan’s capacity is 99 million meter per annum (MMPA), putting it at the second spot behind Arvind Ltd, whose capacity is 108 MMPA. In four months, the Gujarat-based Nandan claims, its capacity will rise to 110 MMPA, making it India’s and indeed Asia’s largest denim maker.

“We are at an advanced stage of completing our expansion,” Deepak Chiripal, CEO, Nandan Denim, told The Hindu in an interview. “The denim industry in India is growing at 15 to 18 per cent a year.” Mr Chiripal added that several international players have begun to source denim from India “due to raw material and other input advantages” apart from stable economic and political environment.

“India needs to double its denim manufacturing capacity in next three to four years due to exploding global demand,” he added.

Interestingly, it was Arvind’s success in the denim business that prompted the Chiripals to enter the segment. Nandan’s original capacity was only 6 MMPA, and it has gradually scaled up in the wake of growing Indian and global demand. Nandan officials said the company exports denim to 28 countries and has 3,000 employees at its facility in Gujarat.

Govind Sharda, President, Nandan Denim told The Hindu , “We always wanted to make denim for different segments of buyers, and never wanted to confine to any specific segment like our competitors. We also focused on catering to the requirement of both local and global brands at different price points. This created demand for our fabric and helped us add capacity.”

In India, the current per capita consumption of denim is at 0.3 pairs per person as compared to 2 pairs in China and 8/9 pairs in UK/US. “This leaves scope for expansion by all players in this segment,” officials said.

The installed denim capacity in India is 1.2 billion metres per annum (BMPA). Production capacity is approximately 1 BMPA, taking into account 85-90 per cent capacity utilisation. “Of this, we had a capacity of 99 MMPA on September 30, 2015 giving us almost 10 per cent of the market share of the Indian denim industry,” Mr Sharda said.

Industry estimates put the current domestic consumption of denim at between 700-800 MMPA, while 200-300 million metres are exported. Assuming the domestic market grows at a compounded annual growth rate of 15-18 per cent (the current growth rate), that demand would reach 2 billion metres by 2020.

At the close of BSE on Tuesday, Nandan Denim was trading at Rs 130.40 a share, down Rs 3 from the previous close.

Source : http://www.thehindu.com; Nandan Denim
Posted by NSE2ZOOM at 11:43 AM No comments: R-Infra had in March bought 18% stake in Pipavav Defence for Rs.819 crore and had announced an open offer.

Reliance Infrastructure Ltd (R-Infra) has acquired management control in defence ship maker Pipavav Defence and Offshore Engineering Co. Ltd, with the Anil Ambani-led company closing the open offer period for acquiring the controlling stake.
In a statement on Wednesday, R-Infra, with its wholly-owned subsidiary, Reliance Defence Systems Pvt. Ltd, announced the closure of the open offer period and said that it will acquire sole management control of Pipavav Defence following the completion of applicable formalities.
The board of Pipavav Defence will be reconstituted and the firm will be renamed Reliance Defence and Engineering Ltd.
“The payment for validly tendered shares, subject to scrutiny and processing, will be completed by 31 December 2015,” R-Infra said.
R-Infra had in March bought 18% stake in Pipavav Defence for Rs.819 crore and had announced an open offer.
A person close to the development said R-Infra has managed to get around 17% stake through the open offer, which sought 26% of share capital.
Post the offer, R-Infra will own approximately 35% stake in the shipbuilding firm and acquire management control.
“Majority of the institutional investors have not opted for this open offer and have decided to stay invested in the company,” the person quoted above added.
Strengthening its entry in the defence sector, R-Infra has applied for 16 more licences covering a wide range of land and naval systems.
Last month, Reliance Defence secured 12 in-principle industrial licence approvals from the Department of Industrial Policy and Promotion for manufacturing aircraft, helicopters, all-terrain combat vehicles, unmanned aerial vehicles, night-vision devices, sensors, navigation and surveillance equipment, propulsion systems and simulators.
On 4 November, the R-Infra board said that new high-growth opportunities in the defence sector, arising from Make in India and Skill India initiatives serve vital national priorities and have several attractive features.
The board said these include relatively low capital intensity, a lower gestation period, minimal regulatory uncertainties, higher job creation and the potential for better return on equity.
On Wednesday,shares of Pipavav Defence and Offshore Engineering Ltd gained 16.70% to close at Rs.76.50 apiece on BSE, while benchmark Sensex gained 0.69% to close at 25494.37 points
R-infra gained 3.23% to close at Rs.436.85 per share.
Reliance Group companies have sued HT Media Ltd, Mint’s publisher, and nine others in the Bombay high court over a 2 October 2014 front-page story that they have disputed. HT Media is contesting the case.
Source : P.R. Sanjai; http://www.livemint.com
Posted by NSE2ZOOM at 1:06 AM No comments:

Roiled by debt, is it back to the roots for Jaypee Group?

Roiled by debt, is it back to the roots for Jaypee Group?

Jaypee Group has sold its cash-generating assets to pare Rs75,000 crore in debt but EPC may hold key to its future