DRI cracks down on gold smuggling from Thailand

DRI cracks down on gold smuggling from Thailand 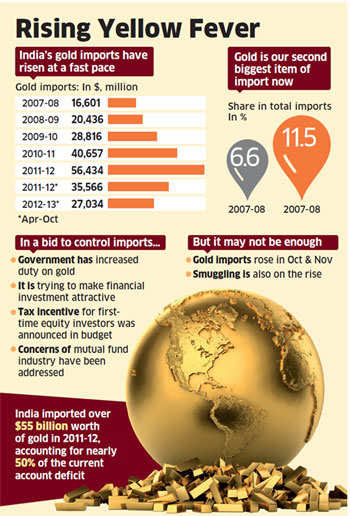 The Directorate of Revenue Intelligence (DRI) on Thursday raided several gold importers who were importing the precious metal from Thailand taking undue advantage of concessional duty, cracking down on a major nationwide anti-smuggling operation.
The government has raised customs duty on gold in bid to curb imports that are largely responsible for the high current account deficit and weakening currency, but a spurt in smuggling threatens to undermine its efforts.

"The operation is currently on...there was intelligence on a sudden jump in gold jewellery imports from Thailand," said an official with the organisation privy to the development.

India has a free trade agreement with Thailand that allows gold jewellery imports at a concessional customs duty of 1 per cent.

The duty rates for imports through normal channels are much higher after a steep increase in this year's budget and goes up to 10 per cent on standard gold bars, gold coins and non-standard gold stand, making Thailand an attractive place for purchases.

Though, stringent rules of origin norms are in place in the FTA to ensure that any goods taking advantage of the concessional duty regime undergoes a substantial value addition in Thailand, DRI is alleging large-scale misuse of these norms by importers.

According to DRI sources, the rules of origin under the FTA envisage a value addition of up to 20 per cent but since gold rates in Thailand are at the same levels at India and value addition can only push up the cost of goods and render gold jewellery imports uncompetitive.

"Gold jewellery manufactured is Thailand is also of low caratage than commonly used 22 carat in India," another official said, adding that the imports are largely actually third-country gold being routed through Thailand.

DRI has been keeping a close watch on gold importers ahead of the festive season as demand shoots up during these months.

Customs authorities had impounded gold worth 942 crore in some 200 cases of smuggling bettween April and June this year, up 272 per cent on 243 crore corresponding period last fiscal that involved 20 cases.

Gold imports increased in October and November after declining for seven months because of festival related demand. Because of the high trade deficit, most experts now expect the current account deficit to come in close to the levels last year, an all time high 4.2 per cent of GDP.

India is world's biggest consumer of gold and demand for the yellow metal had steadily risen over the past few years.

India imported over $55 billion worth of gold in 2011-12, accounting for nearly 50 per cent of the current account deficit.

Email ThisBlogThis!Share to TwitterShare to FacebookShare to Pinterest
Labels: ET