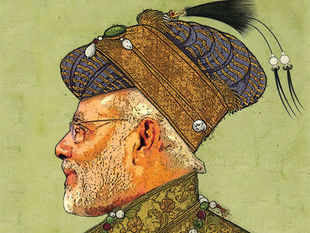 Who could imagine that Aurangzeb and Narendra Modi would have some things in common? But life surprises.

Who could imagine that Aurangzeb andNarendra Modi would have some things in common? But life surprises.
To begin with, both are Gujaratis at least by birth. Aurangzeb was born in the town of Dahod, 200 km from Ahmedabad. Modi's birthplace is Vadnagar, 100-odd km away. Aurangzeb loved the town of his birth and three years before his death, instructed his son, the governor of Gujarat, to take special care of it.
Whether Modi loves Vadnagar or not, he does seem to have bestowed very special attention on it as Gujarat's chief minister.
Aurangzeb was Shah Jahan's third of four sons and was devoted to studying Islam and its exclusive history; his brother Dara Shikoh also studied religions, without pitting Islam against others, especially Hinduism.
Aurangzeb had wide administrative and military experience as governor of the Deccan and Gujarat. He cultivated the image of a saint given to pious deeds rather than savouring material comforts, who earned his living by copying the Quran and stitching caps. Underneath this pretence, however, lay his ambition of ascending the throne when the call came. But he always coolly calculated the right moment to strike and when it came, anyone and everything that stood in his way would be struck down mercilessly. That some of them had been his supporters and well wishers mattered little.
With his sight fixed on the Peacock Throne, Aurangzeb knew that Dara was the chief obstacle. So, he sought to isolate him by befriending his two other brothers by offering them big prizes. Once Dara had been defeated, Aurangzeb turned on the others.
European travellers Bernier and Manucci tell us Aurangzeb invited the youngest, Murad, to his tent, took an oath on the holy Quran that he had no interest in the throne, plied him with unlimited liquor until he lost his moorings, put him in chains and sent to the Gwalior fort.
Familiar Stepping Stones
After a while, Murad was executed following the pretence of a judicial process. The other brother, Shuja, was virtually driven to modern Myanmar and was killed by locals, probably at Aurangzeb's behest. Dara had been killed brutally and publicly.
Shah Jahan was jailed in a small room in Agra Fort where he spent his last eight miserable years. Aurangzeb did, however, display his human side once by not doing away with the mullahwho refused to invoke Islamic sanction for all his acts.
The path Modi has traversed in his ambition to occupy the prime minister's chair has marks of the same cool calculation at each step and the same ruthlessness towards anyone standing in the way.
Modi got around Atal Bihari Vajpayee's admonition of not observing rajdharma during the Gujarat riots of 2002, by getting Lal Krishna Advani's support. Now Advani is isolated in his own party. He may have to flatter Modi to retain his Gandhinagar Lok Sabha seat.
Keshubhai Patel was also Modi's patron once; one gets to hear little of him any more. Political, rather than physical, elimination is the democratic method of dealing with friends turned adversaries.
Aurangzeb had punished a few who had turned to him opportunistically; Modi is happy to see several of his senior Gujarat officers jailed for carrying out fake encounters. Modi's administrative response to the Gujarat riots has always raised several questions about his politics. Any remorse? No, strong men have no remorse.
Aurangzeb was hard-core Muslim at heart, believing in the supremacy of his religion, revelling in promoting communal animosity. He was willing to make small concessions to Hindus. He demolished the Kashi and Mathura temples and erected mosques on their foundations. He also gave land and monetary grants to temples, including Varanasi's Viswanath, and Hindu monasteries.
The Placebo Effect
As his conflict with Shivaji grew more fierce, he resorted to granting more and more mansabs (military ranks, official posts) to rival Maratha groups. Indeed, the number of Hindu mansabdars under Aurangzeb was the largest.

Hate Them, I Love Them...
Modi has left no one in doubt where his heartlies: in hard-core Hindutva, imbibed well from the RSS. Yet, he would bend even the RSS to cater to his ambition. Realising that India was bigger and more complex than Gujarat and ignoring Muslims would harm rather than help him, Modi's camp has suddenly decided to subsidise the distribution of skull caps and burqasamong such Muslim men and womenas are willing to be seen in his rallies.
Democracy is open to variations. Even his language at the rallies has taken a turn, placing poverty rather than Muslims as the chief enemy. Cool calculations and ruthlessness of purpose define Modi as much as they did Aurangzeb.
The writer is a former professor of history,Jawaharlal Nehru University