The four big stock bets of Rakesh Jhunjhunwala
Among the stocks the 'Big Bull' recently put his faith on, Lupin has been the star performer 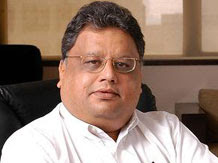 Rakesh Jhunjhunwala hasn't had much luck in some companies in his portfolio, with a number of them tumbling in the recent mid-cap carnage. However, the ace investor has gone ahead and selectively raised stake in some of these, having trimmed in others. A look at his and his family's March quarter shareholdings shows he has increased stake in Mcnally Bharat, Anant Raj, Lupin and recently, in SpiceJet. With the exception of McNally Bharat, the rest of the companies in the list have seen a price uptick in the range of 15-44 per cent in the past month.

Anant Raj Industries
A leading realty company in the National Capital Region, Anant Raj has a slightly different profile, with a focus on lease and rental income, and less reliance on debt funding. It is one of the oldest, having constructed and developed a little over 19 million sq ft area in 30 years, with a good implementation record. The company has a land bank of about 1,100 acres, of which 670 acres is for commercial space; it is currently developing about 500 acres in the latter. This provides good visibility to rental income in the coming years. In the residential space, the company is looking to create 11 million sq ft over the next three to four years, which will boost growth. The company has good earnings and revenue visibility, as analysts are expecting profits to double by FY15, compared to the FY12 net profit of Rs 119 crore. Analysts calculate the net asset value at about Rs 110 a share, significantly higher compared to its current Rs 69 a share.

McNally Bharat
A small-sized engineering company, McNally Bharat's fortunes are closely linked with the capital expenditure of India's engineering and infrastructure sector. Though the business prospects might remain favourable in the long term, in the short term it has its share of worry. Though the revenue and order book are growing (the latter is at Rs 5,300 crore, a little over 2.2 times revenue), it faces working capital issues. As a result, debt rose 57 per cent to Rs 685 crore in the December 2012 quarter.

"Although the company is currently facing headwinds in terms of tight liquidity conditions and deteriorating working capital, valuations at 3.7 times FY14 earnings per share and 0.5 times the FY14 book value adequately cover all the concerns," said Rohit Agarwal, who tracks the company at SPA Securities. The good part is that given its diverse presence across the sector and service offerings, it has been able to grow and get business. Even in the difficult times since financial year 2008, turnover grew over five times to Rs 2,700 crore in FY12. If economic growth perks, expect good growth in revenue and, more important, profitability. SpiceJetIndia's domestic air passenger traffic has moved from around 12 million in the year 2000 to about 60 million now. There is less doubt about the growth opportunities in aviation, as most agree that in a growing economy, more will travel. No wonder that foreign airlines are eyeing the Indian markets. However, the question many have is whether Indian aviation companies can make money in the light of high cost structures and taxes. After Kingfisher shut operations, SpiceJet has been able to improve its share to 18 per cent, being among the top four. Structural growth could benefit the company in the long run but analysts are eyeing a rebound in demand next year. "We expect traffic growth to revert to 12-14 per cent, closer to the 10-year CAGR (compounded annual growth rate) of 15 per cent. SpiceJet is relatively insulated from competition, with the highest exposure to smaller towns as compared to other airlines," says Joseph George, who tracks the company at IIFL, in a recent note. Analysts are also hoping that pricing power will return in the coming years and a possible cut in taxes could lead to higher savings on cost.LupinLupin has been a consistent performer, with both the US and domestic markets contributing to strong growth. Over the past five years, it has improved its presence in the US market through a mix of brand acquisitions and niche product introductions. The US focus has catapulted it to the number five position by generic prescriptions in a span of seven years. This region contributes 40 per cent to overall revenue in FY13 as compared to 36 per cent in FY12.The company is planning to improve its share from the world's largest generic market to 50 per cent by developing new limited competition therapies, such as oral contraceptives, dermatology and respiratory care drugs.Besides the US, the company's India growth story has come about on the back of a high number of product launches, tie-ups and scaling up of presence in new therapy areas. As against the industry growth of nine per cent yearly, Lupin clocked 22 per cent in the March quarter. Managing Director Nilesh Gupta believes with the current run rate of 30-40 product launches in the domestic market, a growth rate of 18-20 per cent is sustainable.