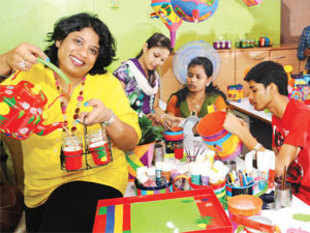 The interior designer was doing up a design studio in Kolkata in January 2011 when the clients asked her to include some artwork to brighten up the place.


Most entrepreneurs start their venture after weighing a business idea; others spot an opportunity and capitalise on it. However, 35-year-old Puja Bajpai took the first steps towards 'A Krazy Mug' without realising she had done so. The interior designer was doing up a design studio inKolkata in January 2011 when the clients asked her to include some artwork to brighten up the place. Instead of heading to the market, Bajpai decided to put up some of her own work. The client liked it and an idea was born. A year later, her dream became a reality.Bajpai, who started as a junior designer in 2000, climbed the corporate ladder as she moved from Delhi to Pune, then Kolkata, before settling in Mumbai. "But as you rise, you realise that there are fewer opportunities to explore," says Bajpai.The stagnation hit her in 2006, when she was working as a senior designer with an architecture firm in Pune. Four years later, she had to shift when her husband, Alok, who works with an oil and gas firm, was transferred to Kolkata.It was here that she started freelancing, working as an independent designer for various firms. "I also started buying raw material and working on it," says Bajpai. The freelancing proved successful, but in end-2011 she had to move to Mumbai. By now, she was confident of starting her venture.Over the next year or so, Bajpai and her husband researched and studied how she could make her work more business-friendly. "Alok helped me zero in on quirky art products that I could design and sell via e-commercewebsites," says Bajpai, planning to work from her Powai apartment. Finally, in April 2012, 'A Krazy Mug' was born with a seed capital of Rs 25,000.A Facebook page was her only attempt at publicity, but she got lucky with favourable customer response. "Within two months, the order list became unmanageable and I had to hire a coordinator. She also employed a few artistes and work started on a bigger scale," she says.After nine months, Bajpai and her team had earned Rs 30,000 and managed to break even. However, the orders did not abate and work from home became unfeasible. Her resident welfare organisation also objected to commercial activity, so she hired an office space at Sakinaka. Around this time, Bajpai also decided to expand her team. After interviewing nearly 1,000 artistes from across the country, she formed a core team of 20. While five of them work on a full-time basis, the rest are freelancers. In the meantime, Alok has also started helping with the day-to-day operations.What has helped streamline costs is sticking to the third-party e-commerce websites like Shoppo and Its Hand Made instead of having their own payment gateway. "This helps us focus on the product while outsourcing marketing and payments to someone else. Since this has worked fine for us till now, we will continue with it," says Bajpai.The handmade products, like kettles, mugs and sprinklers, take up to three days to finish and are tested to last longer. Costing Rs 499-5,000, Bajpai's creations are also sold through 7-8 retail outlets in metros. Given the response, the firm is eyeing a revenue of Rs 45-50 lakh in the coming fiscal year.